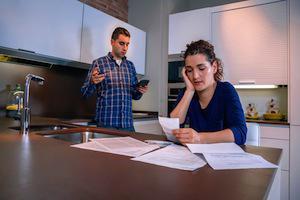 When a couple dissolves their marriage, all marital property, including both assets and liabilities, must be allocated between the spouses. Dividing marital debt is a similar process to dividing assets; however, there are unique issues that come with apportioning debt in a divorce.

The best and simplest solutions are when spouses are able to either pay off their debt or collectively divide their debt before filing for divorce. However, these options are not always possible, and the Court may need to split the marital debt.

When dividing debt in divorce, Courts use the principles of equitable distribution. Hence, the debt is divided fairly, if not equally. Courts take into account factors including:

Marital debt generally includes debt taken on by either spouse during the course of the marriage and before filing for divorce. A liability’s status as marital debt is not affected by whether only one spouse’s name or both spouses’ names are on the documents. Even hidden debts that only one spouse knows of may be marital debts.

Common types of debt that are divided in a divorce include:

Non-marital debt includes debt that either spouse incurred before the marriage. Couples may designate debt as non-marital by signing an agreement with this provision. Additionally, an agreement may include debts attached to property received by one spouse as a gift or inheritance, such as a mortgage on an inherited house.

When dividing debt between spouses, Courts have several options. The Court may split the debt evenly between both parties or it may use debt to offset a large asset that is awarded to one spouse alone. For example, if a divorcing couple owns one car and has large amounts of credit card debt, the Court may assign both the car and the debt to one spouse.

When one spouse defaults on a debt after a divorce, this can cause serious problems if the debt was originally created in both spouses’ names. Mortgages on family homes, car loans and shared credit card debts may involve this problem. If one spouse defaults on the loan, the creditor can pursue either spouse for payment of the debt, even if there is a Court order assigning responsibility for the debt to one spouse alone. In Illinois, divorce does not supersede the claims of any creditor. If possible, debts should be legally reassigned to one spouse upon divorce, such as by refinancing a mortgage.

If you are thinking about divorcing your spouse, please contact compassionate Palatine family law attorney Nicholas W. Richardson to schedule a confidential consultation.