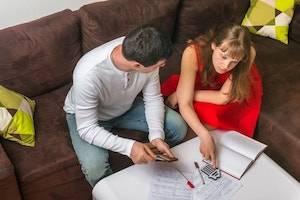 One of the perks of marriage is sharing and receiving benefits from a spouse’s property and income. However, this can become a huge negative when a couple divorces.

In addition to dividing marital assets, a divorcing couple is also expected to divide marital debt. Deciding how to handle these obligations can be tricky, and both parties may benefit from settling property division before a divorce is finalized, or at the very least, via a private agreement.

If the Court gets involved in deciding this issue, Illinois follows the equitable division of marital property system in divorce. Equitable division requires Courts to determine the fairest way to split a couple's marital property by taking into account a variety of factors set forth in Illinois statute. In practical terms, this may mean the division is not equal. Moreover, as the division concerns marital debt specifically, how the debt was accumulated can greatly influence how a Court decides to allocate that debt.

The ultimate resolution of the marital debt division question can have profound effects on a person's financial future, and therefore needs to be thoroughly understood.

What is Marital Debt?

Marital debt falls under the umbrella category of marital property, and generally includes any joint accounts or liabilities assumed that benefited the other spouse or the marriage overall. Thus, simply speaking, joint credit card accounts are viewed as marital debt, even if only one spouse used an account most or all of the time.

In addition, credit cards in the name of one spouse, but used by the other spouse in the capacity of a signer, would also be considered marital debt and is subject to division. To neatly define marital debt is difficult due to all the various ways a person can assume financial liabilities. However, the following types can, and often are, divided in divorce:

How Divorce Affects a Person's Liability

Starting with the legal process of marital debt division, Courts are more likely to assign debt to the spouse who is most financially able to pay the debt, including credit cards in the other party's name. In addition, if one spouse personally accumulated debt in an effort to put the other spouse through school or job training, the benefited spouse may be ordered to pay for all or part of that debt.

With regard to the effect of a divorce decree on person's liability to a creditor, one crucial point must be kept in mind: regardless of how responsibility for a debt is assigned in divorce, creditors are still legally able to pursue an account holder for unpaid debt obligations. As a result, if the parties privately agree, or a Court orders a particular spouse to pay credit debt and he or she does not do so, then the other party is still legally responsible if the accumulated debt was a joint account or in that person's name. A divorce settlement is a private contract, and has no legal effect on rights of creditors.

One way to minimize risk and take the outcome out of the Court's hands is to privately agree to assume all debts in one's name in exchange for a greater share of the marital assets. This allows a party to protect his or her credit once a divorce is finalized.

Assuming mountains of debt in the wake of divorce can lead to financial collapse. Guard against that possibility by hiring an experienced Hoffman Estates family law attorney who can negotiate a fair and practical settlement. The Law Office of Nicholas W. Richardson, P.C. understands the implications of carrying substantial debt out of a marriage, and Attorney Richardson will work to protect your future by attempting to minimize these obligations. Do not hesitate to contact him for a free consultation.