What Causes Divorce Later in Life? 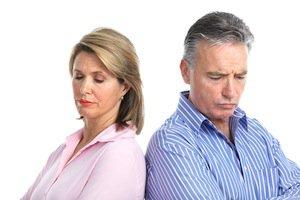 The decision to divorce, regardless of a couple's age or length of marriage, is a difficult one. Recent studies show that the rate of divorce among couples age 50 and older have doubled in the past two decades; in 2009, one out of every four divorcing couples were over the age of 50. In fact, a host of high-profile celebrities have split up over the past year, after decades of being married. This publicity sheds light on the fact that couples who have been together for a long time are not always guaranteed a life together forever.

What causes a couple who has been together a long time to finally call it quits?

Incompatibility. Many couples say they simply grew apart over the years, and that they no longer share the same interests or goals as they did when they were younger. Moreover, people have longer life expectancies than they did several decades ago and the thought of spending an additional 20-30 years unhappy is unappealing.

Illness. While statistics show that more divorces later-in-life are initiated by women, men initiate a divorce more frequently when faced with being a caretaker due to a wife's illness or other health concerns.

Slow decline. Most marriages do not end overnight. Problems are often present. But when work, children and other life challenges are at the forefront, couples will ignore the issues. They may think, “As soon as the kids are gone/I change jobs/my health improves, things will be better.”

In many cases, when problems are eliminated, or when a big life event such as retirement happens, couples are finally able to see that the unhappiness was caused by the marriage itself, not outside influences. Therefore, the choice to end a marriage becomes clear.

Whether you are a newlywed who realizes a mistake was made, or a later-in-life spouse who does not want to spend the remainder of life trapped in an unhappy marriage, Palatine divorce attorney Nicholas W. Richardson can help. With more than a decade of experience handling divorce and property division, Nicholas W. Richardson will work with you to end your marriage as quickly and equitably as possible so that you can begin the next chapter in your life. Contact The Law Office of Nicholas W. Richardson, P.C. today to discuss whether divorce is the right option for you.