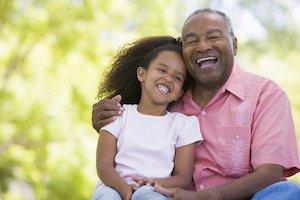 Many of us know doting grandparents. They often brag about their grandchildren’s every accomplishment and share an endless stream of photos on Facebook (the digital equivalent of photo-stuffed wallets). And grandparents undeniably have a lot to offer their grandchildren, such as a link to the past, unconditional love and valuable advice on the future.

In 2005 and 2007, Illinois amended the Marriage and Dissolution of Marriage Act to allow grandparents, great-grandparents and siblings to petition the Court for visitation. The law presumes that a parent’s decision denying contact between grandparent and grandchild does not harm the child’s physical, emotional or mental health. Therefore, the grandparents have the burden of proving that the parents’ denial of visitation is “unreasonable” and harms the child in some way.

When Grandparents Can Sue for Grandchild Visitation

Because there is a presumption that parents know what’s best for their children, the law permits grandparents to petition for visitation, only if they can prove that the denial of visitation was unreasonable, as well as any one of the following:

Even if the grandparents meet the first two burdens, the Court must consider the following before deciding whether to order visitation:

If the Court awards visitation, the amount of that visitation is up to the Judge’s discretion. The Court is also not required to order overnight visitation or visitation outside of the parent’s presence.

As grandparents, Illinois does grant you certain rights when it comes to visitation with your grandchildren. However, it can be difficult to exercise that right because of the law’s presumption that the parent’s decision to withhold visitation is valid. Contact the Law Offices of Nicholas W. Richardson, P.C., to help guide you through the process and help you fight to preserve this precious relationship.