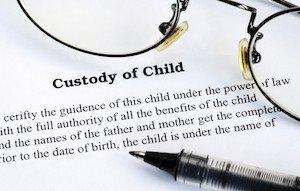 Children are one of the most important and fought over parts of a divorce. Severing the marital relationship also means decreasing the amount of time parents can spend with their child, which means discussions can quickly become contentious. Before proceedings begin, understanding the different types of child custody and available visitation arrangements is helpful to work on an arrangement that takes into consideration the most important factor in all child custody cases: the best interests of the child.

When making an award of child custody (or when the parents agree to custody), the Court makes two separate awards: one for legal custody and another for physical custody. For both types, parents are awarded either sole or joint custody.

Legal custody refers to the parent who has the right to make decisions regarding the child’s health and well-being. Such decisions may include:

When one parent is awarded sole legal custody, he/she has the power to make all decisions regarding the child’s health and well-being without input from the other parent. This does not affect the other parent’s right to visit the child.

Physical custody refers to which parent has actual, physical control of the child. As with legal custody, this can be sole (sometimes referred to as primary) or joint (sometimes referred to as shared). If a parent is awarded sole legal custody, generally the child is in their actual physical care for more than 70 percent of the time, and the non-custodial parent will be granted visitation. Shared physical custody is usually close to a 50-50 split.

If the Court decides on (or if the parents agree to) an arrangement other than shared primary custody, then a visitation agreement will be put into place. In rare instances, such as in the case of abuse or drug addiction, one parent may be denied visitation with their child.

Visitation is not a one-size-fits-all arrangement. It varies from family to family, and can change within a family as the child grows and has different needs. The every weekend or every other weekend arrangement is what people often imagine when they think of visitation, but parents can agree to every other week arrangements, one month on/one month off or, if one parent plans to move out of state, she may have visitation for all of summer and winter break.

In cases where there is concern about the child’s safety in the other parent’s custody (for example, if a parent has substance abuse or mental health issues), the Court can order supervised visitation as an alternative to denying visitation entirely. In these instances, the parent and child may only meet in the presence of a third-party, either a family member or friend approved of by the Court and the custodial parent, or an independent child custody monitor.

If your divorce involves children, or if you need to modify an existing child custody order, you need a child custody attorney who is sensitive to the needs of both parent and child in preserving this very special relationship. Nicholas W. Richardson understands the importance of working with the other parent to come to an agreement that is comfortable for all parents, while keeping in mind what is in the best interests of your child. Contact the Palatine Law Office of Nicholas W. Richardson, P.C., today to schedule a consultation.