Posted on September 12, 2014 in Premarital Agreement 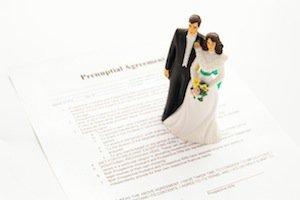 The fact that roughly 50 percent of all first-time marriages end in divorce is common knowledge. However, you may be surprised to learn that 67 percent of second marriages (and 73 percent of third) do not make it “’til death do us part” either. There are no firm reasons why, but one aspect is clear — if you are contemplating taking a second trip down the aisle, you should have an Illinois prenuptial agreement.

A premarital agreement, more commonly known as a prenuptial agreement (or pre-nup for short), is a voluntary agreement entered in to by both parties prior to marriage that becomes valid once the couple is married.

Some may couples balk at the idea of entering in a premarital agreement, calling the thought unromantic or setting a tone that says: “I am thinking about this marriage's end before we're even married.” In reality, premarital agreements are like insurance policies — you hope you never need them, but you are thankful they exist when you do.

As discussed in a prior blog post, a premarital agreement allows the couple to outline how their property will be divided in the event of divorce. The agreement can cover property not only that each party has prior the marriage (non-marital assets), but property that they may acquire during the marriage.

There are certain requirements that must be met in order for the premarital agreement to be considered valid by the Court, if the couple divorces and seeks to have it enforced.

Agreement must have been entered into voluntarily. If either party was forced or coerced in any way into signing the agreement, it is invalid and unenforceable.

How would the fair and reasonable disclosure provision apply in real life? Assume a wife received an inheritance $500,000. If she received it before the marriage and fails to disclose it in the premarital agreement, the agreement may be found invalid. If the wife receives the inheritance after the marriage, she is obligated to disclose the gift to her husband, unless he waived the right to receive future disclosures in the agreement.

If, however, the wife failed to disclose the inheritance, whether she received it before or after the marriage, because the husband was present at the attorney’s office when she received the check, this would likely not invalidate the premarital agreement. Why? Because each party is entitled to ‘reasonable’ disclosure. If the husband was present when his wife actually received the inheritance, then he most likely knew about this particular piece of property.

If you are getting married, whether it is your first or second trip down the aisle, consult a Palatine family law attorney to discuss a premarital agreement. Nobody enters into marriage thinking about divorce. That is why planning for it now, when both parties are calm, collected, and in a loving relationship, is the best safeguard for your personal and financial future. Serving clients throughout Cook, DuPage, McHenry and Kane Counties, contact The Law Office of Nicholas W. Richardson, P.C., before saying “I do.”