Legal Separation vs. Divorce: Deciding Which is Right for You 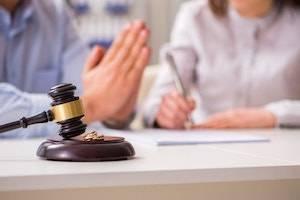 The build-up that leads to the end of a marriage can be slow and methodical, with each spouse looking for ways to avoid the potential unfortunate outcome. The last step some couples take, before starting formal divorce proceedings, is to separate for a period of time in one final effort to salvage the marriage.

Periods of separation are commonly informal, and spouses mutually and privately decide how living arrangements, child custody and finances will be handled. Additionally, periods of separation will typically lead to either reconciliation or divorce; however, couples do have the option of formalizing their separation with the Courts.

Legal separation may be a mere formality before initiating divorce, or separation could be an in-between arrangement a couple remains in for a significant period of time. Legal separation provides most of the legal mechanisms and benefits offered in divorce, yet this process stops short of dissolving the marriage. Consider the following suggestions as to when couples may want to consider legal separation over divorce, the drawbacks of separation and how Courts handle these petitions.

Points in Favor of Legal Separation

Frequently, the reasons behind opting for legal separation over divorce are financial. Some possible causes include:

Legal separation should not be viewed as an intermediate move to divorce. Unless both spouses are onboard with legal separation, this option is more likely to motivate the non-filing spouse to file for divorce and skip this step entirely. Additionally, Courts cannot divide marital property in legal separation cases, and any property acquired by a party after a legal separation is granted is not part of the marital estate. Thus, this procedure could deprive a spouse of property rights. Finally, legal separation will cost both parties some amount of money, which may be better spent on a divorce if that is the most likely outcome.

In order to obtain a legal separation, the parties must be living separately when the petition is filed. Also, at least one spouse must have lived in Illinois for a minimum of 90 days. Similar to divorce, the party seeking the legal separation needs only to claim that "irreconcilable differences have caused the irretrievable breakdown of the marriage" as sufficient grounds for the petition.

The Court cannot divide property, unless the parties agree on the distribution, and any property agreement incorporated into the Court's order is final and non-modifiable. In fact, the Court is specifically prohibited from valuing or allocating marital property in legal separation actions, and will only reject a proposed property settlement from the parties if the agreement appears unfair.

If the parties later decide to divorce and the couple does not have an agreement that addresses the payment of spousal maintenance, the Court will consider whether to award temporary or permanent support as a new issue, even if spousal support was granted in the legal separation order.

Ending a marriage triggers a number of legal issues that should be evaluated by a passionate Inverness divorce attorney so your rights and interests are not unnecessarily lost. The Law Office of Nicholas W. Richardson, P.C. understands that divorce is sometimes necessary, and is here to guide you through the process with an eye to obtaining the best outcome possible. If you live in the area, contact the office for a free initial consultation.