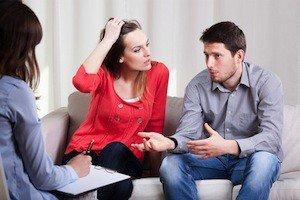 In addition to allowing for fault-based divorce, the state of Illinois allows no-fault divorce, based on a couple’s “irreconcilable differences.” A no-fault divorce may be pursued if neither spouse was at fault — there was no cruelty, infidelity, bigamy, abandonment, drug or alcohol abuse, etc.

If you simply do not want to air your dirty laundry in Court, or do not want to go through the stress of a trial and having to prove fault, then a no-fault divorce may be your best option.

To obtain a no-fault divorce in Illinois, a couple must fulfill three requirements:

However, a couple does not necessarily have to be separated for the full two years. Instead, the couple may agree, in writing, to shorten the period to six months prior to entry of a divorce judgment. If they cannot agree, they must wait the full two years.

To live separately and apart does not necessarily mean that the spouses must have lived in separate houses for the two years. Even if they still live in the same housing, they can also show that they lived as if they were separate. Essentially, they must show that their living situation was more like roommates, sleeping in separate bedrooms, and without engaging in sexual relations. So, if the spouses do not have the money to live separately, or if they want to keep both parents in the house for a child’s sake, they can still satisfy the two-year separation requirement.

Courts do not want to deter separated couples from obtaining counseling and reconciling. Therefore, after a couple ceases to cohabit, the two-year separation period still counts if the couple cohabits:

Unlike no-fault divorces, fault divorce does not require a waiting period, and so it may seem more attractive to some couples. However, be aware that in a fault divorce the fault grounds will not generally be considered in the property settlement or in the alimony calculation, although they may be taken into account when determining child custody.

The recently-passed Senate Bill 57, which will go into effect on January 1, 2016, makes significant changes to the system of no-fault divorce. Because of this, anyone considering filing for divorce in Illinois should make sure to understand these modifications, and consult a legal professional for help.

If you are considering a divorce, an experienced Palatine family law attorney can help you determine which grounds, whether fault or no-fault, will be best for you. Please contact The Law Office of Nicholas W. Richardson, P.C., in Palatine, to schedule your initial consultation.