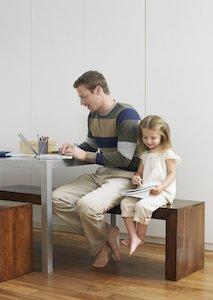 One of the sad realities of divorce is that each parent has less time to spend with their children. But in 2013, the Illinois legislature passed a law that would maximize the amount of time parents can spend with their children, regardless of the final division of child custody. The new law, which amended the Marriage and Dissolution of Marriage Act, went into effect on January 1, 2014, and allows the Court to grant parents a right of first refusal for child care in child custody and visitation agreements.

The Right of First Refusal in Child Custody Cases

As in any child custody case, the parents may agree on its terms that includes agreeing to give each other a right of first refusal for child care.

In making the award, the Court must consider and provide for the length and kind of child care requirements invoking the right, the amount of time each parent has to notify and respond to the request for child care, transportation requirements and any other action necessary to protect and promote the best interest of the child.

Child custody cases are stressful because no matter the outcome it ultimately means less time spent with your children. If you and your ex-partner are arguing over child custody and visitation, you need an experienced family law attorney in your corner to help you get as much time with your children as possible. If you live in Palatine or Chicago’s northwest suburbs, contact the Law Offices of Nicholas W. Richardson, P.C., today to discuss your child custody and visitation options.